Now that these are available, you can start submitting clips!

these are only for shred off
Mathieu Gauthier
Top

Yeah, but I heard you might get extra credit for using them in other submissions too.

so you heard from yourself?
sounds like a reliable source haha
Mathieu Gauthier
Top

3 days until registration closes. We're now up to 31 competitors for Routines! Also happy to see some big names like Taishi and Vasek registering in the past couple days.

We could now reasonably see a Routines finals that includes:

That's a pretty credible top 8, and you gotta figure podium is pretty much guaranteed to be awesome. There's also 3 more days for the pool to get even more competitive.
Ken Somolinos!
Top

That's great, glad to see some big names up there. It will be interesting to see how things go.
TJ Boutorwick

Registration closes in a few hours for Worlds.  I have to say, I am thrilled by both the quantity AND the quality of competitors that have registered.  Even if nobody else registers before the deadline, we're looking at 38-43 competitors in each event.  That's one of the better turnouts I can recall in the past decade and probably top 4 or so in the 20+ years I've been competing.

There was also a nice influx of big names in the last couple days which should make for an amazing finals.  It also makes the cut for finals harder, at least in routines.  I'm not sure how they're setting it up, but the way I'd do it would be to make 8 pools of 5 players and have the top 1 of each pool advance to finals.  Where it gets interesting, is what style of seeding you use in the 8 pools. The two most common are snake seeding and straight seeding.

If you had a lot of confidence in your ability to seed players relative to each other, you'd want to use snake seeding: 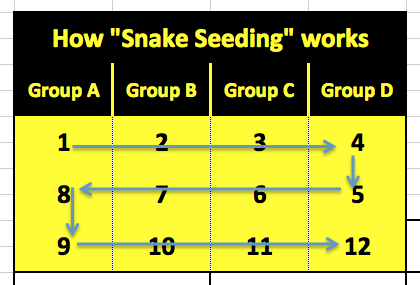 So with 8 pools in a snake seed, your Group A would be:

Now, if you didn't have as much faith in your ability to accurately seed all players relative to each other, you might opt instead for "straight seeding."  Basically, it looks like snake seeding except the second row is reversed:

With 8 pools in a straight seed, your Group A would be:

In this format, the top seed has less of a reward, since the second best player in their pool is higher ranked than in snake seed.
I'm curious which style of seeding they'll use for this year's Worlds.  On one hand, players like Taishi, Vasek, Pawel, and Cerny have competed so much in the past 3 years there is a deep enough data pool of results (and better yet, results of them competing head to head) that you can rank them against each other pretty accurately.  A snake seeding would make a lot of sense for a tournament with only these players.  But now you throw in the mix Honza and Landes, and things get interesting.  Honza is a 3 time champion, but hasn't competed in any event in 7 years.  Landes' last competition was 2017, but you almost have to throw out that result because of injury...which means his last result was silver in 2015.  How can you project/predict/rank Landes and Honza's potential against Taishi/Vasek/Pawel?  I'm not sure you can.  That'd be an argument for straight seeding.
Ken Somolinos!
Top

Interesting post!
I will use method a like we always do
I think the seeding is quite good, I have confirmed it with other organizers, it could be debatable but I can also explain pretty much all positions. Coming soon

It's ON!
Mathieu Gauthier
Top

Ken you got this!
TJ Boutorwick

Ken you got this!

Haha yes so true. But we love it don't we!
TJ Boutorwick

It will be a very interesting event, I don’t mean to remove from other events, but I think routines is so demanding that we will possibly see the most advanced routines by quite a notch if some top seeds have that perfect routine
Mathieu Gauthier
Top

My money is on Vasek beating Taishi.

OK OK, in all seriousness I wanted to say the pools look pretty well done. None stand out as ridiculously harder than any others and as a competitor I greatly appreciate this was posted so fast.
Ken Somolinos!
Top

Faster then me, I need sleep!
Mathieu Gauthier
Top

"You can do anything" -Greg Nelson
Top
Post Reply
84 posts